This year, I came across code like the following several times – in different projects, written by different developers (yellow indicates the piece of code I’m wondering about). I’m not sure why they do it – maybe they come from a programming language that doesn’t know about short circuit logic.

If you think „what the heck is short circuit logic“, please read on. 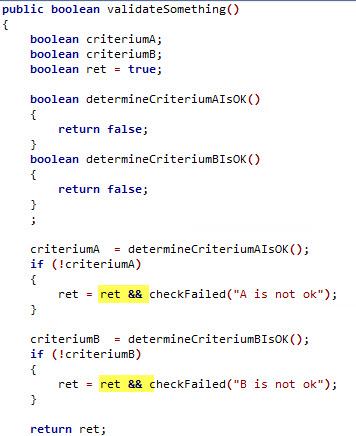 To get you started, ask yourself what the output of the above code will be.

The answer is: Only the error message „A is not ok“ will be given to the user.

Of course there are valid constructions where the above ret = ret && x makes perfect sense, f.ex. if the second Operator is an expensive validation itself.

The other very common shortcut is: a || b – if a evaluates to true, b won’t be evaluated.

PS: No, I don’t want to argue about the following: